Feature: Run custom scripts from Object Explorer
You can specify a custom script text, its name and node on Object Explorer on which you want to run it from. Node name, current database, current connection string and current server can also be specified in the custom script with keywords that are replaced with their respective values at script runtime. Since version 3.8.7.0 you can order the scripts shown in the context menu in the feature's Options. Simply change the index and it will be sorted in the ascending irder of that index.
Since version 4.7.0.0 you can mark the script as External, and it will be run via the command line. 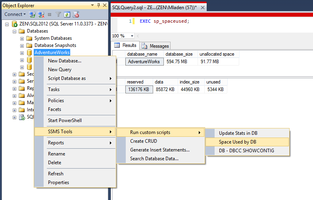