SQL Snippets
SQL Snippets give you the ability to type shortcuts in editor which, after pressing Enter or Tab, turn into a predefined code block. You can have as many SQL snippets as you wish.
Version 5.5. added {CB} as a placeholder that is replaced with clipboard text when the snippet is expanded from its shortcut text.
Since version 3.8 you can now choose which snippets to export/import. When importing your can also specify if you want to overwrite a snippet that already exists with the same shortcut or change it in any way.
Since version 2.7 you can also use {C} where you want your cursor to be after the snippet has been expanded.
Since version 1.9 snippets can be saved to html or printed out directly.
Since version 1.8 snippets can be exported and imported by themselves. 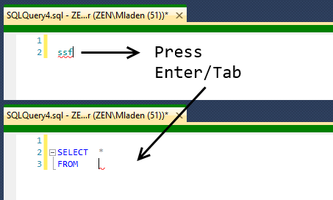